Signs Your Spouse Wants A Divorce

So you don’t have any concrete proof, but something inside is telling you that your spouse wants out. Since you’re afraid of bringing the nightmare to life, you don’t confront them about it.

But as the old saying goes, “Actions speak louder than words” and there are some sure signs that can tell you if your spouse wants a divorce. While some of these may come and go with time, others are serious warnings that your spouse is halfway out the door.

Here are the top signs that your ex wants a divorce….

If you and your spouse have been fighting like cat and dog, then it’s important to tackle your issues head on. If your spouse is more interested in brushing it off or ignoring the problem all together, then it could be a sign that they’re ready to call it quits.

In order for a healthy marriage to survive it’s important for spouses to openly communicate and discuss issues that are affecting their relationship. If they’ve already given up on the marriage, then they may find it pointless to waste their time and energy on arguing or trying to resolve issues.

Have you noticed that lately your spouse has little or no time for you? If so, then they may no longer be making you or the marriage a priority. Regardless of whether your spouse is genuinely busy or dishing out excuses, there’s a healthy balance that’s required for a marriage to last.

If your spouse is never home or can’t do thing with you because they’re busy with other people or doing new things, then it’s likely they’re avoiding you. Be weary, of these types of situations usually indicate that divorce is on their mind.

If you think back to happier times in your marriage, one of the first things that comes to mind is probably your spouse’s loving ways – the kisses and hugs, chats and laughs. If they’ve suddenly changed their behaviour, have nothing nice to say or become cold and distant towards you, then it could be a sign that they want a divorce, or at the very least are falling out of love with you.

The loss of affection is a silent killer of marriage; it happens gradually then before you know it you feel more like roommates than lovers.

A marriage on the rocks has a major lack of intimacy, so if your spouse when from passion to passive, then there may be a reason for that. That said, it’s not uncommon for lovemaking to wane over time and there are many different reasons for it.

Still, if you’re sleeping in the same bed but not feeling emotionally connected, it’s a sign that they don’t want to be intimate with you. This lack of physical affection could be a red flag that they’re over you, or maybe even getting it from someone else.

As a married couple, chances are you and your spouse have the same circle of friends, or at the very least know each other’s friends. If your spouse suddenly replaces your shared friends with new ones that you don’t know, it could be a sign they want out of your marriage.

Removing him or herself from your mutual friend group is a way for your spouse to get away from you. If they’re considering ending your relationship, this could also be their way to cut ties with your shared friends. If your spouse’s new friends are single and enjoy celebrating the bachelor(ette) lifestyle, be prepared to deal with the disaster heading your way.

If your spouse is constantly calling you names, being critical or speaking sarcastically, it’s a sign they want a divorce. No happily married person would treat their partner poorly or try to hurt or upset them. If they have divorce on their mind they’re likely trying to justify their thoughts by degrading you. The more they think about it, the more bitter they’ll become.

When this happens don’t rebuttal or try to fight back, it’ll only fuel their fire. Instead, walk away, get out of the house or find a close friend to vent to. If this kind of abusive behaviour escalates or gets physical, you may want to considering calling it quits yourself. No matter how much you may love your spouse, no one deserves to be abused.

Can you remember the last time you saw your spouse smile or laugh with you? If not, it’s probably because they’re not happy in the marriage. Sure, things change over time and it’s unlikely that your spouse is going to show the same amount of positivity and joy being around you as they did when you first met, but the spark between you should never go out.

When you’re in love your spouse is the one person you can count on to cheer you up. If you’re no longer doing this for your spouse, then they may be headed for the door.

Just because you’ve seen some of these signs that indicate your spouse wants a divorce doesn’t mean your marriage is going to collapse tomorrow. It’s likely that you’ve still got plenty of time to change course and re-build a healthier, happier marriage with your spouse.

But, that being said, a marriage crisis doesn’t just resolve itself, either. You do need to take action to put your marriage back on the right track and avoid divorce. 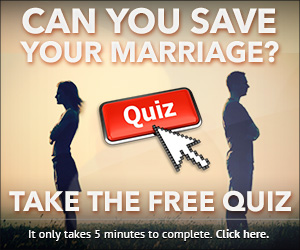 Ricky Booth
Ricky Booth is an experienced relationship counsellor from Seattle, Washington. He specializes in helping couples stop or prevent divorce and assisting individuals re-connect with an ex. Ricky works with local and international clients (via Skype or phone), helping them to enjoy healthy and long-lasting love lives.